Created in 2017, Unfading Daydream is a literary magazine that strives to feature the genres that inspired us to start writing (science fiction, fantasy, horror, etc.). We want to showcase stories of all types – from romantic, to platonic, and especially ones featuring LGBTQ+ themes. 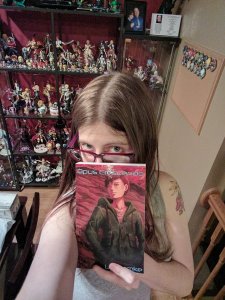 LL Lemke is a dreamer from Oconomowoc, WI. She spends most of her time creating worlds, weaving stories, and having a terrible grasp on what a sleep schedule is. Her free time is spent playing video games and writing with friends. She can often be seen rooting for fictional villains or picking out a morally grey character as her favorite. When she grows up, she would like to pilot giant robots. She has an endless amount of stories floating around her mind and hopes to get them all on paper one day. She has self-published four books: Opus Aria, Opus Prelude, Opus Crescendo, and Convergence Point: where worlds meet.

Adelei Wade is a Kansas City native and everyone’s mom. She can most often be found elbow-deep in a craft project or yelling into a gaming headset. Her hobbies include writing, cosplay, and dabbling in game programming. Her favorite things are birds, giant robots, and queer folk holding hands. She has made a name for herself in various fandoms with her fanfiction, and hopes to publish her original work someday, which will most likely included queer robots. Her favorite genres are crime fiction, speculative fiction, and queer romance.